The signing of Eric Garcia is just a matter of time. The centre-back has decided to return to Barcelona and the club hope to reach an agreement with Manchester City for him to return this summer, if not they will wait until his contract expires in 2021.

His destine seems clear, but first Garcia must finish the current campaign, so Barça and City will sit down to talk after the Champions League.

Garcia's won his place in the City team since lockdown, with Pep Guardiola regularly starting him. He's grateful, but his desire is to return to Barça, the club of his life.

Barça have made it clear that he will have to earn his place in the side, but that he's coming back to play an important role.

Garcia will have to compete with Gerard Pique, Clement Lenglet and Ronald Araujo and is convinced that he can break into the side. Barça are confident they can do the deal. Garcia fits the style and has grown at City.

That's the idea Barça have regarding their four centre-backs for next season, which means there will be no place for Samuel Umtiti, who they will listen to offers for. 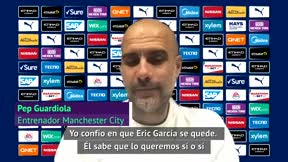 All you need to know on Barcelona's new signing Gustavo Maia