Martin Odegaard, who starred for Real Sociedad on loan last season, will return to Real Madrid for the 2020/21 season and therefore cut short the original plan of a two-year loan deal.

The decision came as a surprise for Real Sociedad as they had actually expected Odegaard to join up for preseason this week.

Odegaard's performances in San Sebastian hasn't gone unnoticed by his parent club. The young midfielder scored seven goals and provided six assists in LaLiga as he proved himself ready to compete at the highest level.

His goal contributions, particularly assists, match up well when compared to Madrid's most productive players. Benzema has 8 assists, Modric 7 and then Odegaard is next. With Modric set to turn 35 next month and Eden Hazard struggling to stay fit, there now appears to be a place in Zidane's squad for the Norwegian midfielder. 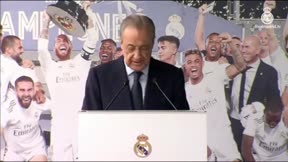 Zidane was the man who made the decision to recall Odegaard earlier than expected. The loss against Manchester City in the Champions League has caused Zidane to speed up his own rebuilding project at Madrid.

It's a sad end to what has been an extremely productive year with Real Sociedad. "You've treated me like I was another academy graduate," Odegaard told the club's official website.

"It's difficult to leave your mark in such a short amount of time but Martin Odegaard achieved that. The left-footer leaves us to rejoin Real Madrid but we'll never forget all that you've given us in this unforgettable season. His goals, his football, his personality, effort and his humility mean Martin will always be remembered with immense fondness by all of the La Real family. He wanted to thank you all for the love shown in this video. Eskerrik asko, Martintxo, and we wish you nothing but the best for the future," is what an official statement said on La Real's website.