Emerson Royal hasn't played a single minute for FC Barcelona but he could be a source of vital income for the Camp Nou side this summer.

Milan have made an offer of around €20m for the Brazilian full-back which was promptly rejected by Barça.

It's worth remembering that Barça share the rights to Emerson with Betis, who will need to be compensated if he's sold before June 2021. As part of the joint agreement, Betis were to 'loan' the player for two seasons.

The deal might become even more complicated for Milan if PSG back up their interest in Emerson. According to 'TMW', the Brazilian has been on PSG's radar ever since there was talk of Neymar making a return to Barcelona. 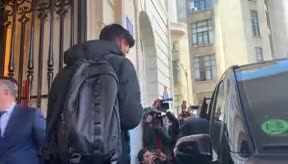 Roma are interested in signing Samuel Umtiti from Barça

Emerson could be used to drive down the cost of Neymar, who is available for around €170m, alongside other players.

At the moment PSG haven't backed up their interest with a bid, although Emerson is definitely on the list.