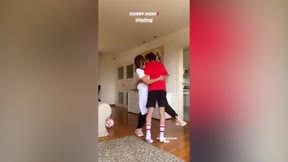 At Barca it's raining offers for Riqui Puig

Ronald Koeman has opened the door for Riqui Puig to leave FC Barcelona during this transfer window. Puig must make an important decision on his future, weighing up the pros and cons of each option, as he looks to continue his development.

Riqui has three choices: stay at Barça, leave on loan or leave permanently.

The youngster signed his latest contract alongside Josep Maria Bartomeu in 2018. He was just about to turn 19 and he penned a three-year deal with an option to extend it by a further two. Those extra two years are often activated once he's been promoted to the first-team squad.

In Puig's case, the player is yet to earn his place in the senior team. This means those extra two years aren't guaranteed to be activated and he would be out of contract in June 2021. If he stays, Puig wouldn't return to Barça B and, according to Koeman, wouldn't have a place in the first team either. It leaves Riqui in a difficult position.

Last January, Puig opted to stay when the club offered him the chance to leave on loan. At the time, Puig formed part of Garcia Pimienta's B side. Quique Setien promoted him to the first team picture but he wasn't officially a member of the team.

Riqui Puig won't be short of offers to leave on loan this summer. So far, the youngster has ignored those proposals and instead focused on trying to get as many minutes as possible under Koeman. Things have now changed.

Betis, Celta, Granada, Alavés and Ajax are the teams interested in Puig. He might want to choose the right team, stylistically, to help with his eventual return to the Camp Nou in a year's time.

The problem with loan deals is they can quickly cause you to fall out of the reckoning. You only need to look at Miranda after a season on loan with Schalke 04. Oriol Busquets was a star player for Twente but he doesn't have a place in Koeman's squad either. Aleña joined Real Betis on loan but never really fit in.

For Koeman, it's vital that Puig gets regular playing time to aid his development.

This would be the most painful option for everyone. Puig is a project at the club, one of those footballers who fits like a glove in what Barça wish to produce through La Masia. Koeman's switch in the system means his natural role no longer exists. He isn't comfortable as part of the double pivot and this further reduces his options at the club.

Nor is now the right moment to cash in on someone with as much potential as Puig. So many sides are struggling for funds and any offers are likely to be way below what Barça value him at. The only way this could be acceptable is if a buy back option was secured on any transfer. For Puig though, that is the last thing he wants to consider.