Barcelona lost 1-0 at Getafe. Mata's penalty was enough for the hosts to take the win. It shows Barcelona lack goals. They had chances but were not effective when it came to finishing them. Circumstances that have taken Barcelona to eight goals from their first four games - and one in their last two.

It's not strange when you think that they sold Luis Suarez and didn't sign a replacement. They only managed one shot on target against Getafe from a total of seven efforts. Their lowest since facing Granada in 2019, when they also got one.

That dynamic must change if they are to achieve any success this season. 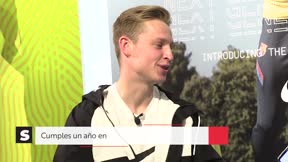 Tebas : European Premier League only looks good in at a bar at 5am
Why Dembele and Depay deals fell apart on final day of transfer window
Mateu Lahoz to referee Saturday's Clasico between Barça & Madrid
Reports: Man City to offer 17 million euros for Lionel Messi in January

Elche cruise to a 0-2 win vs. Alavés at Estadio de Mendizorroza
Show more

Barca 5-1 Ferencvaros: Messi and Ansu got things going, Pedri and Dembele ended them

Gerard Pique sent off and banned for Juventus clash

Pedri scores his first Barca goal in the Champions League