Arturo Vidal has come out firing ahead of Barça's match against Bayern in the quarter-finals of the Champions League. The Chilean midfielder didn't hold back when asked about the confident messages coming out from the German camp in the lead up to the contest.

Bayern are arguably the in-form side of Europe having won 18 matches in a row whilst claiming Bundesliga and German Cup honours. They've drawn just once of their last 27 contests in all competitions.

Those numbers aren't reason for Barça to be fearful though. "I haven't paid much attention to what Bayern have said because I've been there and know what comes out in the press isn't what they think in the dressing room. But tomorrow they don't play against a side from the Bundesliga, they're playing against the best team in the world: Barça," responded Vidal. "It's the most important match of the year and if we do what we need to, we'll be in the semi-finals. We are desperate to win this competition." 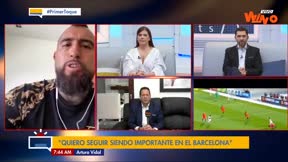 The Chilean midfielder was also brutal when it came to suggestions Bayern now have the best player in the world. "Although Lewandowski is the best striker, alongside Luis Suarez, to compare him with Leo is impossible. Leo is from another planet."

Arturo Vidal is a fan of the single-leg format. "I like it because it forces teams to show what they're made of from the first minute. In two-legged contests, there's a feeling out process and it isn't always as enjoyable to watch."

"Bayern are always the favourites but Barça are the best team in the world. Let's see who wants to win the match more."