Ernesto Valverde will pick his best side for the Atletico Madrid game (Sunday, 16.15 CET), a match which he said his side are preparing for as if it's their "final game".

Barça's best side has been defined for a number of weeks now and the only minimal doubt is whether Valverde will choose Philippe Coutinho or not ahead of Ousmane Dembele and Paulinho.

Jordi Alba will slot back in at left-back after missing the Las Palmas game through suspension, while Sergi Roberto will start at right-back. Gerard Pique, rested for the last game, will partner Samuel Umtiti in place of Thomas Vermaelen. Marc-Andre ter Stegen will be in goal.

In midfield, Valverde will bring Ivan Rakitic back into the side, pairing him in midfield with Sergio Busquets and Andres Iniesta. 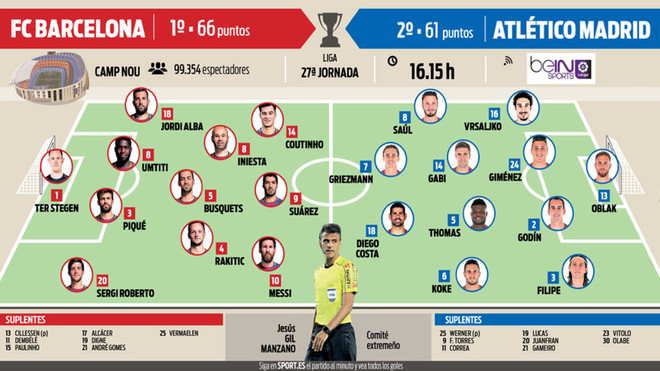 It's here that we run into doubts, with the final space which is up for grabs -- either as a fourth midfield or with Leo Messi and Luis Suarez further forward -- depends on the tactics Valverde chooses to adopt.

Of the candidates, Coutinho's the favourite to start. The Brazilian, who was also on the bench in midweek, would complete a flexible 4-4-2 and would enable Barça to play a more possession based game.

The other option is Paulinho, a more physical, direct player who can get forward and score goals, although he's less useful when it comes to one-touch football.

Andre Gomes' chances of starting have reduced in recent weeks but he did start when these two sides met at the Wands in October (1-1).

If Valverde prioritises possession to keep Atletico's counter-attack at bay, the option of Coutinho is the most likely and also allows Jordi Alba space on the left, one of the teams biggest weapons.

There's also one final alternative, which would see Valverde go for a more open 4-3-3, with Dembele coming in on the right wing.

Villarreal blaze past Seville, scoring 4 at the Estadio de la Ceramica without reply

Jubilant Elche take all 3 points against Cádiz, in a 3-1 win

Sam Kerr's tweet comes back to bite her in the behind