Away from the institutional noise surrounding FC Barcelona, the club are still working on the squad for the new season, with problems to do with moving players on slowing down planning.

Pending who goes and who stays, the youngsters involved don't know if they will have a first-team squad number or not. However, Francisco Trincao has been told he will be registered with Ronald Koeman's squad.

Trincao, 20, has had a fine preseason since joining from Braga. He could even start against Villarreal when Barça kick off their league campaign next weekend. It's not been announced, but everything suggests he will take on the No.17 shirt.

Meanwhile, Araujo, Riqui Puig, Ansu Fati and Pedri must wait. The club's initial plan was that they would all be registered with the first team, too, although the club admit it's more complicated that that at the moment.

Ansu is obviously ahead of the rest due to his performances for club and country, so it's logical that he will have priority over the other kids if first numbers eventually become available.

Does that mean the club don't have faith in them or that there's a danger they could alternate with Barça B? Not at all. The four players will remain under Koeman's orders and if they are registered with the B team it will just be a paperwork solution due to a failure to lighten the squad.

Remember that the salaries of the players registered for the B team aren't included in the first team's tally, which would reduce how much is outgoing against the La Liga imposed limit. 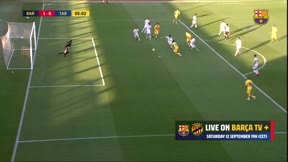 As for Pedri, who has also done well in preseason, the situation is complex. Las Palmas have an option to take him back on loan, but the option could be broken in the following circumstances: if he goes on loan to a club in a higher division or if Barça register him for the first team. So far, neither of those have happened.

The Maradona I knew the year he discovered cocaine

Schuster: At Barca we could not take advantage of Maradona

Sergio Busquets accelerates in his recovery from injury