Barcelona are still doing everything they can to sell a number of players following Arturo Vidal's move to Inter Milan over the weekend.

The biggest name on the table is Luis Suarez, who recently flew to Perugia for an Italian exam to secure double nationality in case it would help with a move to Italy. Juventus was the ideal destination but the Italian club have now ruled it out. The Uruguayan still doesn't have the passport confirmed and it may not be through in time for the closing of the transfer window. He also needs to agree the termination of his contract with Barça, who offered to pay him seven million euros, half of what he would earn for the year, but he turned it down.

Jean-Clair Todibo is a case where money could be made. He's returned to training after recovering from coronavirus and Benfica and Wolverhampton Wanderers have both shown an interest.

The other names on the table are Samuel Umtiti, Rafinha and Matheus, but there's not much movement. Umtiti seems a lost case, despite being offered to various clubs. No one seems keen to make an offer. 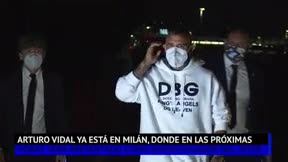 Rafinha has not been used in preseason and Barça hope Celta Vigo will move to take him back to Balaidos on a permanent deal, but at 15 million the Galicians are holding fire. Rafinha and Celta hope his price will drop the closer we get to the transfer deadline.

Finally, there are no offers for Matheus Fernandes, who spent last season on loan at Real Valladolid, but Barça could make money from another Brazilian, Marlon Santos. The defender was sold to Sassuolo in 2018 but could now be on the move again. Fulham are prepared to pay around 15 million and Barça are ion line to make 50 percent of the sale.