The relation between Eder Sarabia, Quique Setien's assistant, and the squad, isn't in its best moment. Movistar filmed a rift between the coach and players during the second water break in Barcelona's 2-2 draw at Celta Vigo on Saturday. There were moments of tension between Sarabia and various heavyweights.

Messi, Pique, Luis Suarez, Vidal and Umtiti were having a break when Sarabia came close to give instructions. Just in that moment, Messi walked away from the conversation with his bottle of water. Under Setien's eye, Sarabia tried again to establish contact with Messi but the Argentine left his water and went off again without interacting with him. 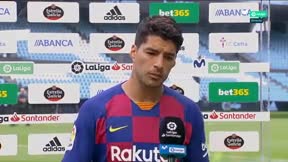 Suarez on frustration of more dropped points & poor away form

Movistar also captured a conversation between Sarabia and Rakitic in which the Croatian looked disapproving until he ended the conversation with a face crossed with disagreement and a dismissive gesture.

Suarez also criticised the coach after the game. "That's why the coaches are there," he said when asked about Barca's bad form away from Camp Nou.

OFFICIAL: Arda Turan has returned to his first ever club: Galatasaray

Barça's youngsters are handed shirt numbers for the match against Napoli