Barcelona need Real Madrid to drop five points from their remaining two games to win the league. Given they've won nine in a row, it's unlikely and, following their win against Granada on Monday, Luis Suarez has analysed the reasons Barcelona have given up top spot to their Clasico rivals.

How have you seen the team post-lockdown?

After the break, the feelings were very good, we felt that we were in good shape. We trained at distance at first but then together, which was really nice. And the feelings in the games were good. It's difficult to maintain the same level of play when you're playing every three of four days. It provides mental and physical wear and tear. All the teams feel it. We're aware that we had started well but we had some stumbles which changed out plans.

With Madrid's win in Granada, is it over?

If I have to be honest, it's almost impossible. Madrid have a big lead and there are only two games to play.

We have to look at ourselves. I am very self-critical with myself. We have to be on a group level, too. If we lose the league it's because we let points escape us ourselves. You can look for excuses of moments that happened in other games ... but we have to be aware that if it's escaped, it's because of our own mistakes. 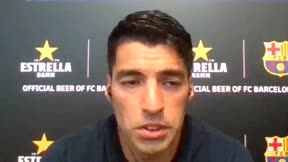 Suarez on Champions League: If we're together and at 100 percent, we can win it

Where did it escape?

It's clear that the game in Sevilla is one when things were made difficult for us. We had chances to win. That was important, but the key was Vigo. We lost a huge opportunity. If we'd beaten Celta, we would have been better against Atletico. The blow came in Vigo, the goal in the last minute from Asapa. It hurt a lot.

Yes, because in a league season there are key moments. We had 11 games in a month and we had it in our hands. We let the chance pass us by. And that's frustrating. We can't look for excuses.

Did VAR have as much to do with it as suggested?

It had an affect. There are moments when VAR is rightly spoken about. There were other teams looking to achieve important things that VAR has conditioned. Their own players have said it. They publicly complained.