FC Barcelona forward Ousmane Dembélé has taken a step forward in his injury recovery from the hamstring problem he has had since February. He was working at the club's training ground on Tuesday, which is a positive development.

In the images released by Barca he was seen doing exercises to help him recover speed, strength and muscle in his legs. He did accelerations, slaloms and changes of direction.

It's a sign that he's on the road to recovery after surgery.

The 'Mosquito' has been living through an injury nightmare since arriving at Barca, with various muscle problems. This latest one he suffered in training. It was identical to the one he suffered in 2017 in his left leg. Barca signed Martin Braithwaite to replace Dembele in the squad for La Liga but if he's recovered he can feature in the Champions League. 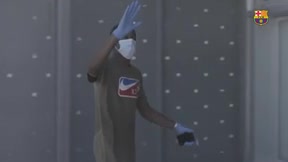 'Le10sport': Wenger turned down the chance to manage FC Barcelona
Valencia's Anil Murthy: "We are going to have a complicated season and must be responsible"
Villarreal confirm the signing of Dani Parejo from Valencia on a free transfer
Athletic Club confirm six people have tested positive for coronavirus
Dembele named in Barça's 26-man squad for Champions League final eight
Alphonso Davies misses Bayern training ahead of Barça clash
Show more

Frenkie de Jong: "Messi is different. He is by far the best player in the world"