Ousmane Dembele and Lionel Messi scored the goals but the Dutch coach highlighted the team's performance, although he was also positive about Antoine Griezmann.

"The only thing the game lacked was killing it off much earlier," he said. "We had clear chances to score more goals. In Antoine's case, it was bad luck. The first one hits the post and he can't do any more with the second one. He has to keep working hard. We created a lot of chances and we don't have much to complain about.

An injury to Ronald Araujo forced Frenkie de Jong to play at centre-back in the second half against Juve.

"We knew from the start of the season we're limited at centre-back," Koeman said. "If we're without one or two we have problems. Frenkie's played games n Holland there and he did very well." 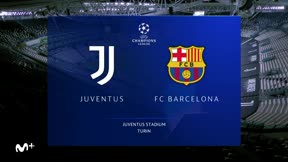 With respect to president Bartomeu's resignation, Koeman said: "We have to focus on sporting issues. With the decision made by the directors and the president, I think the team was very good.

"Hopefully doesn't affect us in upcoming games. We have to play our game and put our energy into football. Non-sporting issues are not in our hands."