There's a light that will never go out amongst Barcelona fans whilst Messi continues to be Messi. Or at least whilst the player is capable of doing the impossible as we saw against Napoli. After his goal and celebration, that mix of faith and ambition, it led the way to the quarter-finals of the Champions League and a match against Bayern Munich.

Barça are known for their style and conviction but this time they must rely on the magic and brilliance of their number ten if they are to progress. They are coming up against an in-form and physically fitter side, one which will continue to push the pace until the last minute. That is something Barça can no longer match in a team full of 30-somethings.

There were plenty of moments against Napoli where Barça were overrun and had to drop deeper in order to keep the Italians at bay. This is no longer a team that can press from the forward line for 90 minutes and it's why Setien is considering dropping Griezmann to add an extra midfielder.

This is the moment of truth. Barça know how to deal with these types of matches. The midfielders will need to make up for the lack of defensive cover the attackers offer. 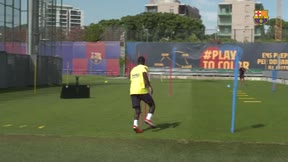 Ousmane Dembele is given the green light to return to action

THE VALUE OF THE CHAMPIONS LEAGUE

It's been a season to forget for Barça but they find themselves just three matches away from winning the Champions League. It's a trophy which could change the entire atmosphere around the club and even justify, to an extent, a poor domestic campaign.

Bayern have tried to make this match extremely personal by questioning Barça, Messi and everything in between. There's an overload of confidence in the Germans as they try to get under the skin of a Barça side who need to win. Lewandowski is better than Messi, Neuer is better than ter Stegen and Bayern are too strong for Barça are all narratives various former players and directors have pushed recently.

Bayern's confidence isn't new, it's part of their culture and DNA. But it's always a risk to downplay the impact and role Leo Messi can have on a football pitch.

Javier Tebas: I prefer that Lionel Messi stays in Spain

Bartomeu and board of directors could resign at Monday's board meeting

More resignation than anger among Barça players after Madrid penalty