AC Milan are still searching for full backs in the transfer market and, according to 'TMW', one option they are considering is Emerson Royal. The Brazilian is currently on loan at Real Betis from FC Barcelona.

Although the current deal between the LaLiga sides is for two seasons, Barça might consider bringing him back early if they can sell him for a high price.

Benfica and Bayer Leverkusen are also interested in Emerson and would be willing to pay between €20-25m. 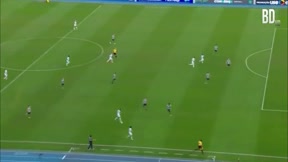 Real Betis fear that Barcelona will sell Emerson this summer

Real Betis are happy with Emerson's performances this season and would love to keep him for next season as previously planned. Yet the final word belongs to Barça, although they would need to pay compensation to end the agreement early.

Manuel Pellegrini recently took over the manager's role at Betis and will see no doubt see Emerson as a key part of his XI next year.

The Brazilian arrived at Betis in January 2019 in a €12m deal. Barça paid that fee but later sold 50% of the rights to Betis for €6m, which included a loan until 2021 and a percentage of a future sale.