Real Madrid's Norwegian central midfielder has suffered a calf injury, which was confirmed by medical tests at the club on Friday.

He is now likely to miss the next three or four games Madrid play, including the Clasico on Saturday week.

Odegaard played in three games for Norway but on Friday he hurt himself in Madrid training. He will miss the Cadiz clash and the Champions League debut against Borussia Monchengladbach, with the Clasico also likely to be beyond his reach.

"After the tests done on Martin Odegaard today by Real Madrid's medical services, he has been diagnosed with an injury in his right calf," said Madrid in a statement, not specifying his absence time. 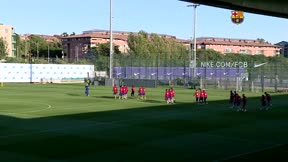 More resignation than anger among Barça players after Madrid penalty