Barcelona forward Luis Suarez has rejected the chance to become the highest-paid player in Major League Soccer, according to ESPN.

Suarez, 33, has been told he can leave Camp Nou and Inter Miami, the club founded by David Beckham, were prepared to pay him €8m net annually over a four year deal.

However, Suarez said no to Miami and they instead announced the signing of former Juventus striker Gonzalo Higuain this week. 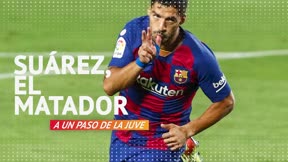 Despite the offer from the U.S, Suarez would prefer to remain in Europe for now. He recently traveled to Perugia for an Italian language test as he seeks citizenship in the country to increase his chances of finding a new club there.

However, a move to Juve has become complicated after the Serie A champions signed Roma's Edin Dzeko.