Juventus' director of football, Fabio Paratici, has ruled out making a move for Luis Suarez this month. The Uruguayan striker was widely expected to join the Serie A kings and will now need to remain at Barça.

Speaking to SkySport, Paratici said this on the move for Suarez: "At the moment we only need a striker. Suarez? He should be taken off the list because the time it'll take for him to get an Italian passport is beyond the 5th of October. We weren't close (to signing him) but it was an option we looked at."

Paratici then doubled down on his stance: "He isn't on our list, he isn't an objective for Juventus. He won't have an Italian passport before the end of the transfer window so we can't sign him. But considered Suarez as an option but we were never close to bringing him in." 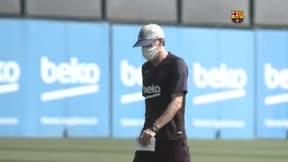 The fact Suarez can't get an Italian passport before the 5th October means the exam counted for nothing. Juve are now likely to press forward with the signing of Dzeko instead.

Suarez is under contract at FC Barcelona until 2021 despite Ronald Koeman saying he wasn't part of his plans for this season. The striker must search for another option or face spending at least six months in the cold at Barça. That or Koeman will be forced to bring Suarez back into his plans.