Juan Martinez Munuera had a terrible Clasico debut in which he gave Madrid a goal via VAR for an inexistent penalty by Lenglet on Ramos.

Help for Madrid from this referee is nothing new, like in Madrid-Getafe last year, and Barca suffered a new castigation from the team of his youth. SPORT investigated his background by going to his native town in Valencia, Villajoyosa.

Eleuterio Marin, known as Elute, is a delegate for the team Jonense Atletico and he welcome us warmly there, just before his team faced CD Polop. In another part of the region Villajoyosa CF were taking on Crevillente Deportivo, in the third division. Martinez Munuera and his father, Juan Ramon Martinez, were supposed to be going.

Despite confirming their attendance, the referee did not appear during the game, hiding to avoid controversy after his Clasico performance.

Elute has known the Martinez family for years and they have never hidden their love of Madrid. He grew up in an environment dominated by Real. 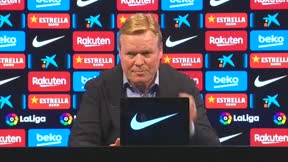 His father, Juan Ramon, was one of the founders of the Madrid fan club Los Amigos de Benidorm, along with another known Madrid fan, Eduardo Zaplana, the former president of Valencia.

Juan Ramon is known in the region and was a referee too, in the third division. It is known that he has refereed several games with a Real Madrid shirt on under his refereeing clothes.

Juan Ramon can be extremely proud because his other son, Miguel Martinez Munuera, was one of the assistant officials in the Clasico that Real Madrid won, because of his children's performances and VAR.

Martinez Munuera is a policeman in Finestrat (Alicante) and a referee for 11 years. Barca know him well after he oversaw their Copa del Rey investigation against Athletic Bilbao last season, not wanting to give them a penalty for a foul on Frenkie de Jong.