Donny van de Beek is willing to wait for Barça even if he knows a deal is very complicated right now.

Ajax refuse to budge from their asking price of €55m for the 23-year-old midfielder and Barça simply can't afford that. At least not until there have been a few more confirmed departures at the Camp Nou.

Right now, as you can imagine, the main focus is on resolving Lionel Messi's current situation.

Ronald Koeman is a huge admirer of van de Beek and feels he could add a lot to his new project. Even before the Dutchman's appointment, Barça tried to sign the midfielder last summer. 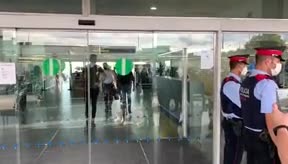 Reports in Holland suggest Real Madrid are frontrunners for van de Beek's signature. However, the midfielder has told his agent to put any potential deal on hold as he waits to see if Barça follow up their interest with a bid.

Real Madrid, Tottenham Hotspur and Manchester United have all been linked with a move for van de Beek.

The transfer window doesn't close until the 5th October so there is still plenty of time to finalise a deal. It's believed van de Beek would love to link up with Frenkie de Jong again at Barça.