Three Barcelona players will not be available to face Real Madrid in the Clasico at 4pm on Saturday (CET).

Marc-Andre ter Stegen is recovering from knee surgery, Samuel Umtiti is still out and Matheus Fernandes is also not available.

Jordi Alba is a doubt to start but included in the squad and Koeman may pick him at left back.

No players are suspended. Gerard Pique has picked up two bookings so far but nobody else has more.

Ter Stegen has not played this season but Neto is doing a good job in his stead. Umtiti has not featured either. 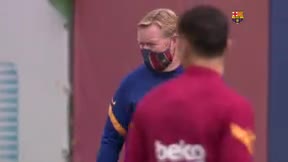