Bruno Fernandes is not happy at Manchester United. His recent substitution against Tottenham left him annoyed with his coach Ole Gunnar Solskjaer and in England there are reports that he could leave Old Trafford -- just nine months after arriving.

The situation has put some of Europe's biggest clubs on alert, including Barcelona and Real Madrid, who could end up in another transfer 'battle.' That's how the Daily Mail have reported in, saying "Barça and Madrid are ready to start a new battle to sign the United superstar."

According to the same report, both clubs are closely monitoring Bruno's situation in Manchester. United paid 68 million euros to sign him from Sporting Lisbon in January. The Sun report that he was upset to be removed at half time of the 6-1 loss to Spurs and is even planning a possible departure. 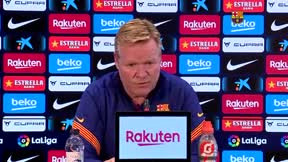 Depay and Eric Garcia remain options for Barcelona in the winter

In nine months at the club, Bruno, 26, has scored 14 goals for United in all competitions and become one of the key players at the club. Bruno hit back at the reports suggesting him and Solskjaer had a problem this week, saying that he believes outside parties are trying to "destabilise" him and the club.