Antoine Griezmann says Didier Deschamps believes in him and plays him in the right place. The forward, who has not fitted in at Barcelona, came out with that after scoring again for France on Wednesday night.

The little prince was sending a message to Ronald Koeman, perhaps. But the stats seem to back Griezmann up. He has 33 goals for France, the fifth highest scorer in their history, behind Henry (51), Giroud (42), Platini (41) and David Trezeguet (34).

For now those stats are not being reflected at Camp Nou, where he's either started as a solo striker or out to the left or right wings.

Philippe Coutinho is playing in Griezmann's ideal role (where Messi would also be an option), with the Frenchman on the right in Koeman's scheme. He is often far from the ball and with little freedom to move. 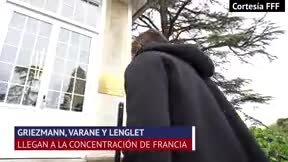 Antoine Griezmann: Deschamps knows where to play me

Here are his Barca stats:

At Atletico Madrid he was often used either as the striker or as second striker. And that was his best era at club level.

Simeone liked Griezmann near the opponents box and he was also able to get a lot of assists there. However Barca's game has nothing to do with Atletico and that is where the problems start.

Real Sociedad lose David Silva to muscular injury
Javier Mascherano responds to the rumours of his Barca return
Gerard Moreno: The feeling is we could have taken the game

Guardiola: "My desire is that Lionel Messi retires at Barcelona"
Show more

Mingueza: People know what I have suffered to make it here

Barça & USMNT defender Dest: I hope the goal is the first of many!