Barcelona were due to elect a new president next March but with the resignation of Josep Maria Bartomeu on Tuesday the start gun for the electoral campaign sounded early.

While Carles Tusquets heads a managing committee that will oversee the running of the club in the short-term, the runners and riders to replace Bartomeu will attempt to convince club members to vote for them.

A hard-fought campaign is expected with a number of people in the running and a number of factors conditioning how the candidates choose to campaign.

External factors like the coronavirus pandemic will play a part but internal factors will be key. The debacle against Bayern Munich in the Champions League was the detonator to usher in change.

Lionel Messi's future will perhaps be the biggest talking point. Can the new president promise that he will sign a new deal under him? 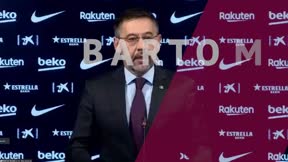 Let's take a look at the men vying for the top job at Camp Nou.

Here are the members who are expected to run. Some have already confirmed they will, others have announced their intention to run and others have remained quiet: