Ernesto Valverde's relationship with La Masia has always been in the spotlight. He arrived at the club as a player who had always given youth a chance at Espanyol, Villarreal and, above all, Athletic Club.

But the need to get results above anything else made it difficult for him to turn to the academy in his first season at the club.

The trend has changed slightly, especially this season with Carles Perez and Ansu Fati. In total, the Barça coach has now handed first team debuts to 14 youngsters. Here's the full list: 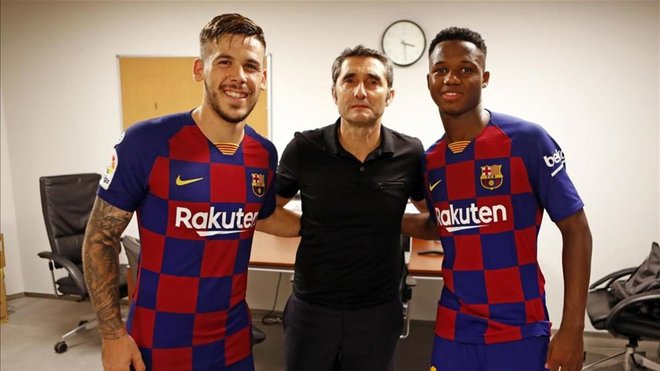 Signed from Real Valladolid with high expectations, he impressed when he played and looks close to the first team until getting injured. Now at Leganes.

Made his debut in the Copa del Rey in Murcia but didn't get many chances other than that. Given the state of play, he was loaned to Eibar last season and this year to Getafe.

Also debuted in the Copa del Rey against Murcia, albeit in the home game, playing 62 minutes. Injuries have held him back since and he is now on loan at Twente in Holland.

Joined Barça B from Celta and left without the Catalans taking up their option to sign him permanently. He played for 33 minutes, coming for Gerard Pique in a Copa del Rey game.

Considered the star of the academy, an overbooking in midfield has limited his chances. He played in the Copa del Rey last season and later in the league. He's not yet featured this season.

The left-back made four appearances, including 90 minutes against Tottenham in the Champions League, but didn't appear after a cup game at Levante. He's now on loan at Schalke 04 following the signing of Junior Firpo.

Still with Barça B. Last season he played in the Copa del Rey for the first team.

Made his first team debut in a cup game at Leon, playing for 61 minutes. That's his only first team appearance, although he could make the bench for the Eibar game after the international break if Pique, Araujo and Umtiti are all absent.

The Senegal right-back made three appearances last season, all in La Liga. He played against Huesca, Celta Vigo and Eibar. He's been promoted to the first team since but hasn't played this season.

The talented attacking midfielder played in the league against Celta Vigo for 84 minutes. This season he's not yet had a chance, but the Copa del Rey has not arrived yet and he's doing well with Barça B.

A week after Collado, Ruiz's moment arrived. He played 22 minutes off the bench against Getafe in a 2-0 win. He had offers to leave in the summer but remained with the B team.

The last to arrive last season was the first to appear this year. The Catalan winger debuted against Eibar, playing 18 minutes. He's played much more this season, though, scoring against Real Betis and setting up three goals, too.

The only debutant who skipped Barça B, where he's only played friendlies. The 16-year-old has featured a lot this season and has done brilliantly. He has two goals, against Osasuna and Valencia, and played in the Champions League at Borussia Dortmund.

The Uruguayan defender made his first team debut on Sunday, but got sent off 14 minutes after coming on against Sevilla for what was deemed a last-man foul on 'Chicharito' Hernández. A day he will never forget... for good and bad reasons.

Pichichi table: Messi still leads the way despite four games without a goal

Víctor Font demands explanation from Barça board for 'defamation campaign'

Barcelona given permission to sign forward outside of transfer window

Leganes have heard nothing from Barça & point to Braithwaite's clause