Rafinha has spoken about his objectives at Paris Saint-Germain after joining the French champions from Barcelona on Monday.

PSG signed Rafinha on a three-year deal. He joins the club for free but Barça could make up to €3 million in add-ons and 35 percent of any future sale.

"It’s an immense joy for me," Rafinha said. "I had a lot of desire to come when the possibility and opportunity arose and the truth is that being able to realize this moment is incredible. With the nervousness that comes on the last day, signing with a club of this size, I spent the day a little nervous, but with a very happy ending."

Rafinha, 27, was full of praise for his new club, too: "The image of one of the best teams in the world. The truth is that it is incredible to be able to reach a club as big as PSG." 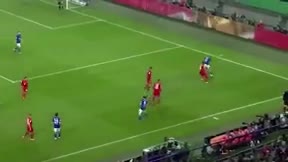 As is natural, the midfielder also spoke about the key players behind his decision to move to Paris. "I have several friends here, both Marquinhos as well as Neymar and Icardi, who always said great things to me about the club," he added.

He introduced himself as "a very versatile player, a midfielder that plays forward, but I hope that other people define me more than I do" and explained his goals for the campaign.

"Being on the same level as I was in the last year [on loan at Celta Vigo], because I feel very good, being able to grow as a player, learning from my colleagues and with the team, being able to win as many titles as possible, of course," he said.

Koeman: "Dest's problem is not serious but we won't take big risks"