One of the many fascinating battles in Barça's match against Bayern Munich will be between Lionel Messi and Robert Lewandowski. Both are in red-hot form and the Bayern camp have tried to suggest the Polish striker is now ahead of Leo as the best player in the world. Quique Setien doesn't think there's a debate to be had.

"Lewandowski is a great footballer but he isn't on Leo's level. That's clear. Right now he's in great form, he's scored 13 goals in the Champions League and has been helped by his teammates. But we saw what Leo did the other day against Napoli. It's good that we can enjoy players like those two."

Lewandowski leads Bayern's attack and has shown himself to be a great goalscorer. However, Messi dominates every facet of play which puts him ahead of everybody else. 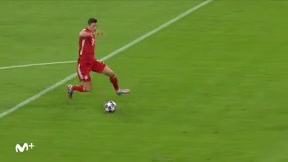 Elber joins the bandwagon: "Lewandowski is better than Leo Messi"

Pep Guardiola was asked the same question, but this time when comparing Messi with Karim Benzema. His response, like Setien's, was clear: no one comes close to Messi.