When Pep Guardiola showers you with praise, there's usually a reason behind it. The Spanish coach knows exactly what he's doing with his treatment and words towards Eric Garcia in recent weeks - he wants the youngster to sign a new deal at Manchester City. That would, of course, include Garcia rejecting the chance of returning 'home' to FC Barcelona.

At the beginning of June, this newspaper revealed that Barça were interested in signing the young centre back this summer. Garcia, whose contract expires next year, is the man the board have chosen to reinforce the defence as well as become a leader over the next few years. Yet Pep isn't ready to let his star pupil leave without a fight. One of Guardiola's traits is establishing young talents in the first-team picture. At Bayern he worked closely with Kimmich and at City is doing the same with Phil Foden and Garcia.

"Eric has a season left on his contract," Guardiola said at a recent press conference. "If Barça want him, they have to call us. But we are going to try and convince him that we want him to stay here for many years. We want him to stay but if he decides he wants to leave, there isn't anything we can do. But he, his agent and his family all know we believe in him."

PEP IS A BIG FAN

Guardiola is convinced that Garcia can develop into some of the best defenders in the world. Only a few months ago he said this about the youngster" "He's a very intelligent player. He's capable of leading the entire defensive line by himself as he pays attention to everything. Today, for example, we didn't know if Watford were going to play with four or five defenders. During the warm-up, he watched some of their routines and told me: 'They're playing with four (at the back)'. And they did. Hardly any player would notice that and Eric is that type of player. He is going to play this year. I believe in him a lot," confessed Pep back in September and he wasn't wrong. 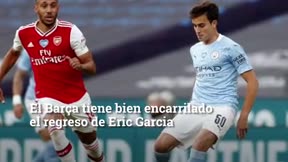 For now, Guardiola and Garcia are focused on the Champions League. The future of the talented centre back won't be resolved until both Manchester City and Barça's participation in the competition has concluded. But Pep will continue his charm offensive to convince Garcia to remain in England.

Elche cruise to a 0-2 win vs. Alavés at Estadio de Mendizorroza

Koeman: "Messi's performances could be better but he is happy"

Eto's furious with France Football for labelling him a right winger