Ousmane Dembele could leave Barcelona in this window. The French forward has opened the door to a Camp Nou exit, conscious that he will have little chance of getting regular game time for Ronald Koeman.

Dembele's intention was to stay at Barca, convince Koeman and earn a place in the team. However the coach doesn't consider him necessary this season and there are offers from the Premier League - Man United and Liverpool.

Barca have decided to try and sort out a deal for him to leave, but only on a permanent deal or a loan with an obligatory buy clause which must be executed by June 30, 2021.

After years riddled with injury and a lack of adaptation to life at Barca, Dembele now seems to understand his time is up and he is open to departing. 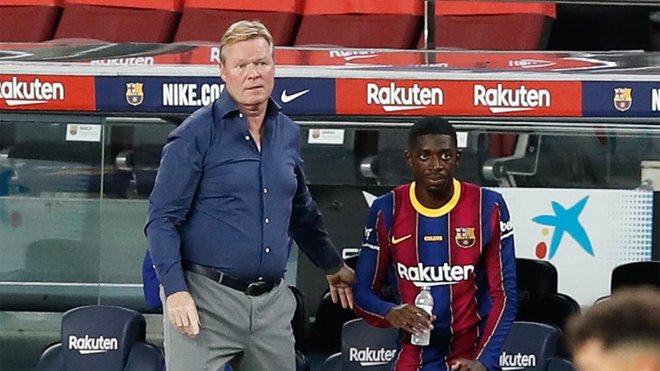 Francesco Trincao and Pedri have arrived and Ansu Fati is offering the speed that Dembele was supposed to. Koeman said himself he brought on Pedri and Trincao in Vigo because they give more defensively than Dembele.

Liverpool are interested and Ole Gunna Solskjaer would have him on United's right wing if the move for Jadon Sancho doesn't go through.

Barca want around 50-60 million euros for the Frenchman.

Real Sociedad lose David Silva to muscular injury
Javier Mascherano responds to the rumours of his Barca return
Gerard Moreno: The feeling is we could have taken the game

Guardiola: "My desire is that Lionel Messi retires at Barcelona"
Show more

Debutant Mingueza: People know what I have suffered to make it here

Barça & USMNT defender Dest: I hope the goal is the first of many!