The coronavirus outbreak has caused the Champions League format to change and that has opened the door up for a surprise winner. There's a very high chance that the winning team could be lifting the trophy aloft for the first time in their history. This is because only two of the final eight sides have won the Champions League before: FC Barcelona and Bayern Munich. Atletico Madrid, Leipzig, PSG, Atalanta, Lyon and Manchester City have yet to claim Europe's top prize.

PSG have had the Champions League as their priority for a while now but they've never been able to get beyond the quarter-finals. Lyon and Manchester City have both reached the semi-finals. 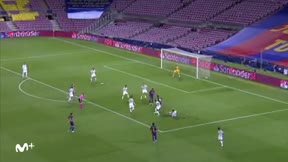 Lionel Messi is up for UEFA's 'Player of the Week' award

The freshest faces in the competition belong to Atalanta and Leipzig. This is the German side's second time in the Champions League whereas it's the Serie A club's first venture in the competition. They will be hoping the lack of pressure will be a factor as they look to extend their unlikely runs to the final.