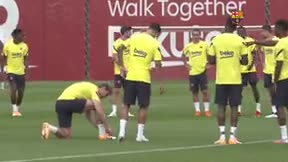 Olympique Lyon are weighing up a way of bringing back their former defender Samuel Umtiti, on loan from Barcelona. The French club know the deal will be economically difficult because of the high wage Umtiti is on at Barca. He also has not played much for the Catalans and has physical problems with his knee, which is another problem to worry about.

L'Equipe say that despite all that, OL are looking into a move for the 26 year old. He has a contract with Barca until 2023. "They have had conversations with his people," report L'Equipe. For OL he would bring 'the leadership lacking in the squad' and believe he will be highly motivated to try and win his France place back. They have until October 5 to find a formula for the deal.