On Monday it'll be the three-year anniversary of the day that Neymar left Barça and signed for PSG. The Brazilian was brought in to be the long-term heir to Lionel Messi's crown but he was tempted by PSG's newly found riches and left through the back door.

Nasser Al-Khelaifi spoke to Neymar's entourage and found he was willing to switch clubs and be the figurehead of his new project at PSG. They parted with €222m, Neymar's buyout clause, and offered the samba star a huge pay rise. At Barça, there was a feeling of betrayal as Neymar hadn't spoken about the interest from PSG until it became public knowledge.

In the end, Neymar hasn't been able to lead PSG to Champions League glory and Barça have failed to find an adequate replacement for the Brazilian.

At the Camp Nou, Neymar won 10 titles across his four seasons there, including the Club World Cup and the Champions League. At PSG he's only won domestic honours and missed large parts of their European campaigns due to injuries.

During his time at Barça, Neymar made 123 appearances in LaLiga: he scored 68 goals and provided 38 assists. He made a goal contribution every 94 minutes according to Opta. 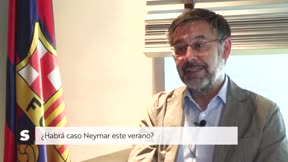 In his three seasons with PSG, he's only appeared in 52 Ligue 1 matches. He's scored 47 goals and provided 26 assists which means he makes a goal contribution every 62 minutes.

It didn't take long for Neymar to realise he made a mistake by joining PSG and has spent the last two summers trying to force a move back to Barcelona. This summer, due to the coronavirus outbreak, there's no chance of a transfer happening.

Koeman: I'm not the villain in the Suarez story, it was a club call

Alena, Pedri and Trincao get their Barca shirt numbers for this season

Koeman not ruling out Lautaro Martinez or Depay signing