Barcelona are working on selling Junior Firpo, which is something they would have liked to do this summer. The left-back is not in Ronald Koeman's plans and Inter Milan are still interested in the player.

Sergino Dest has played as Jordi Alba's replacement ahead of Firpo, who has featured for just 29 minutes this season, in the Champions League, and is yet to play in a league game.

He got 28 minutes from the bench against Ferencvaros and one minute against Juventus.

Inter, for their part, are looking for a left back and think Junior could be what they need. They wanted him this summer but the operation didn't happen, and they'll get back on it from Jan.

Barcelona want money to help them bring in Eric Garcia and Memphis Depay. Inter bought Aleksandr Kolarov this summer but they want a younger option and Firpo is that man - like at right back where they signed Achraf Hakimi. 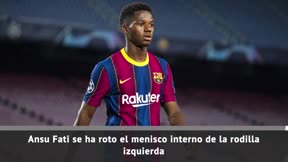 Ansu Fati will have knee surgery after injury

A new contender for Samuel Umtiti's signature in January

Barca's Plan B takes the reins in Budapest

Total rupture between Zidane and many Real Madrid players