Gerard Pique was sent off against Ferencvaros and will miss the next match in the Champions League, against Juventus.

The Catalan centre back was shown a straight red after 68 minutes when he pulled back Isael, the Hungarian side's Brazilian forward, in the area.

Sandro Scharer, the Swiss referee, pointed to the spot and gave Pique his marching orders. Kharatin finished off the penalty to score for the visitors, but Barca ran out 5-1 winners.

Pique's red card didn't cost the team here but might next week. Ronald Araujo, who came on for Coutinho, will take his place in the side. 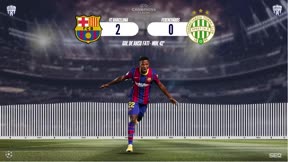