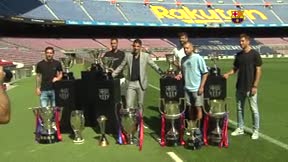 Leo Messi's words on Friday have caused a stir. The Argentine is not happy with Barca's behaviour in the Luis Suarez case and he took to Instagram to make his point. Suarez responded and other former players are reacting too.

Dani Alves, one of the club's legends, backed Messi. "Unhappily this reality has been going on for a while, it's confirmed year after year. It's not about winning or losing, that we know, it's about respect and they don't know that," said Alves.

He was not the only one. Samuel Eto'o joined in and said, "Son, elegance cannot be bought. Look after your self and think about it."