An exciting but demanding seven days lie ahead for Ronald Koeman's Barcelona. The Dutch coach will have to use his squad well having made very few changes in his four games in charge to date so far.

A run of three games in a week begins with Ferencvaros at Camp Nou on Tuesday, sees Real Madrid visit in La Liga on Saturday and then takes in a Champions League trip to Turin to face Juventus next week.

The run of tough matches comes on the back of the first defeat of the Koeman era, too, against Getafe on Saturday. Philippe Coutinho and Ansu Fati were on the bench in Madrid but they could come back into the side for Tuesday's European game against the Hungarian champions.

Both the Brazilian and the youngster, who played a lot of minutes with their respective countries in the international break, will return to the Barça XI. We will see who for. Logic suggests Pedri and Ousmane Dembele will be the two players to drop out of the side.

One player likely to be rested is Sergio Busquets. He's started the season well but Koeman is aware he needs to be rested from time to time. That and the fact that Miralem Pjanic has not yet started a game and needs minutes could see the Bosnian come in for Busquets. 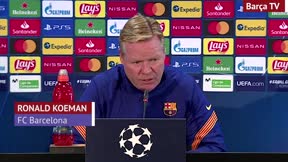