FC Barcelona president Josep Maria Bartomeu analysed various names in the Blaugrana orbit in his interview with RAC1. He said that Neymar's transfer was very complicated, was enigmatic when it came to Lautaro and had high hopes for Trincao and Pedri.

Asked about Lautaro Martinez's 111m euro release clause expiring, Bartomeu said: "On transfers we'll talk when the season is over. If Lautaro's clause is up today, it's up today. The transfers we'll do when it's time and now we aren't signing any players. We're focused on the league and the Champions League." 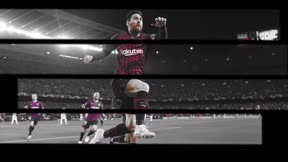 Bartomeu has no doubt Leo Messi will stay at Barca

On Neymar he said "it's unlikely" that he will be back this summer. "On an economic level it's a hard summer for the big clubs. And we're all seeing how we can restructure after the pandemic."

He was excited about Trincao and Pedri. "I'm really looking forward to seeing them here," said Bartomeu.

On Arthur he added: "It's not true that it was done to balance the books. If it was for that, maybe we could have sold other players who had important offers on the table. Pjanic was a much sought after player."