Barcelona need to make bank and there are eight players who are on the exit ramp because they aren't performing at the right level or just aren't part of the project for next season. Those who are being loaned out right now also may find it hard to get a place. They have market value and this could be the perfect moment to sell given the coronavirus inspired economic crisis. 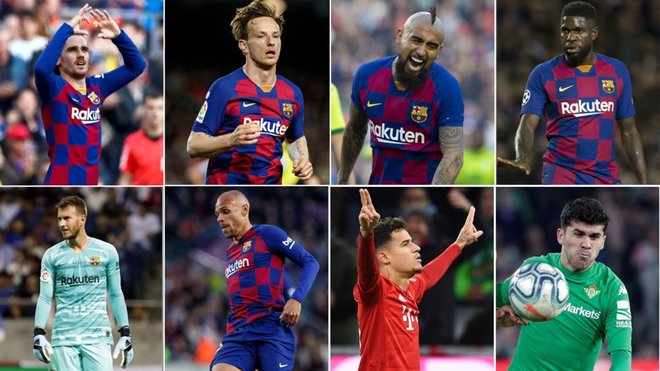 Griezmann finally arrived at Barca last summer, having snubbed the club the year before, and there were very high expectations which he has not lived up to. He has scored 14 goals in 37 games which is not too bad, especially given many of them have served to open the scoring, but in many matches he has gone by unnoticed and without fitting into the side. In the Champions League he scored an important goal at Napoli to earn Barca a draw. But he has just one goal in his last eight La Liga games.

Rakitic is completing his sixth season as a Barcelona player but his credit level is sinking. The fans are no longer hooked on the Croatian, who would like to return to Sevilla.

His numbers reflect the general feeling about him. He's no longer a starter and that was shown by his place on the bench in the recent Clasico. He's played in 31 games, whereas last season he played in 54. Even if he plays in the rest he won't reach it, and he has not scored a single goal yet. Last season he hit five goals, with 4, 8, 9 and 8 in the years before that.

Arturo Vidal has not managed to find a place in the XI and at 32, with a contract until 2021, this is Barca's chance to sell him and get some cash. Transfermarkt puts him at 14m euros, having arrived for 19 with 3m in variables in 2018. Although his mission isn't scoring, he has gone seven games without netting in La Liga and has not played in the Champions League. However he has doubled his tally on last season, getting six so far. He's also only started 13 of those 31 games.

Umtiti has got some hope back with Quique Setien's arrival and his knee giving him a break in recent weeks, but the uncertainty of his physical state leaves a sword of Damocles dangling above him permanently. The defender has good market value, 40m, while his high salary would be good for Barca to get off the books. Big Sam has played only 16 of 38 games this season, less than half.

Neto arrived this season from Barca as part of an operation which sent Jasper Cillessen the other way. The 35m paid in total is far above his market value and he has not played much, hurt by the new Copa del Rey format and two injuries. He has let in 7 in 4 games, a high tally.

Braithwaite came in as an emergency so hasn't had much chance to play. Barca paid his release clause to get him and he won't have a place in the side when Suarez is back, with the club also hoping to bring in Neymar or Lautaro Martinez. The Barcelona striker has not scored yet but has done well in his limited appearances. He would have suitors.

Coutinho will return to Barca because Bayern will not pay his 120m option to buy fee. He has nine goals and eight asssists in 32 games and has started 15 of 24 league games. He still has credit in England and Barca would love to get some money back from his high cost.

Alena didn't convince Ernesto Valverde but when he comes back will try to impress Quique Setien.

CORONAVIRUS LIVE: Follow the latest impact on the sports world

PSG still refusing to negotiate with Barça for Neymar... for now

Luis Suarez: It hurts because we all wanted to reach an agreement