FC Barcelona will return to the Camp Nou for a Champions League match, their first in 2020. The previous match came eight months ago versus Borussia Dortmind (3-1) in the group stage. The key man behind any success is Lionel Messi. The Argentine forward has scored 114 goals in 141 Champions League matches and is set to feature in his favourite round (last 16, 2nd leg) where he's scored 19 goals in 14 matches.

Messi has played in 15 consecutive Champions League campaigns (since 2005/06) and in this specific match, the 2nd leg of the Last 16 fixture, he averages 1.35 goals per game.

His best goal-scoring round is the fifth game in LaLiga: 15 goals in 11 matches, averaging 1.36 goals per game. 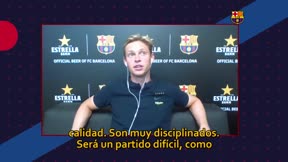 De Jong: "There are four games left to win the Champions League"

The six-time Ballon d'Or winner has scored in every round of the Champions League, except in the 2nd leg of the semi-finals, where he's failed to get on the scoresheet in seven matches.

At the Camp Nou, Messi's record improves even more. He's scored 67 goals in 66 home matches in the Champions League, averaging 1.01 goals per game. He's won 50 home matches meaning they win 75.7% of the time and only losing 3% of the time.

The 'Messi Factor' is massive in the Champions League and if he's alongside players like Luis Suarez and Antoine Griezmann, he's even better.  The more space he finds, the more goals he creates. Especially alongside Suarez who has been a long-term partner in Barça's attack.

Ansu Fati turns 18: The 'kid' grows up and will start vs. Alaves on Saturday

Barcelona negotiating salary cuts with players against the clock