Ronald Koeman will rotate. He does what he says and says what he does. Ter Stegen, Messi and Coutinho are not in Hungary. Lenglet and Araujo are going but are not 100 per cent, so may not feature. Mingueza is the only fit centre-back.

Neto will be in goal, while Dest, Mingueza and Junior Firpo will start. Lenglet is the most likely to be paired with him, but we will see. In the double pivot Pjanic and Alena are set to be paired.

De Jong would therefore be able to rest. Trincao has earned a start on the right and Ousmane Dembele could play on the left. Antoine Griezmann may play up front with Martin Braithwaite to keep consolidating his form.

Riqui Puig is a player fans would like to see and he was good off the bench against Kiev. He hasn't played much for Koeman, with three minutes against Getafe his only other moment in the team.

LISTEN TO A NEW FC BARCELONA PODCAST IN ENGLISH 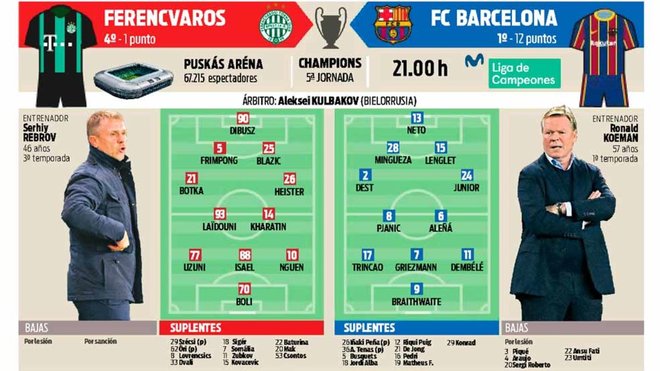 Ander Herrera: The ref told us to fuck off

Eden Hazard blasted for laughing after Madrid defeat by Chelsea