Barcelona are in the quarterfinals of the Champions League although this time they will not have a two-legged tie, as is usually the case in the competition.

They will play a one-off game against Bayern Munich in Lisbon for a place in the final four.

The Catalans have now progressed that far in each of the last 13 seasons.

In fact, on just three occasions have Barça failed to progress from the last 16 out of 18 attempts.

The first was painful, against CSKA in 1992-93. Twelve years later, they failed to beat Chelsea and in 2006-07 they were knocked out by Liverpool. 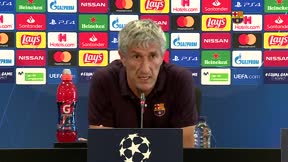 Koeman: I'm not the villain in the Suarez story, it was a club call

Alena, Pedri and Trincao get their Barca shirt numbers for this season

Koeman not ruling out Lautaro Martinez or Depay signing