Eric Garcia could be one of the big surprises of the summer. The Manchester City defender is FC Barcelona's top target to strengthen their defence and negotiations have begun. SPORT have learned that Barça have communicated to City that they're interested in signing the Catalan centre-back. City, knowing that Eric's out of contract next summer and could leave for free, are open to talking about a deal. However, negotiations are still in the early phase and no formula has been found for a move that would see the youngster return to Camp Nou.

Formed in La Masia, Eric felt in 2017 his development would be best served in England. Under the orders of Pep Guardiola, he's not stopped taking steps forward. This season he has played 447 minutes in the Premier League. On Thursday, he started the 4-0 win over Liverpool. And before suffering a KO which left him out for a few days, he was also a starter in the first post-coronavirus break game against Arsenal. City kept a clean sheet in both matches.

Despite the blow of losing him, Barça have not stopped following Eric. The club have monitored his evolution closely, both with City and Spain's national teams. Amazed by his growth, the Blaugrana have jumped at the chance knowing that re-signing him is a real possibility.

Barça believe he would be a strategic signing. For the present and, above all, for the future. The club are convinced he can be key for years to come. 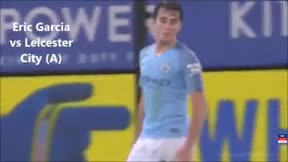 If Barça and City can reach an agreement this summer, it doesn't look like the deal will be done immediately. This transfer window will be especially long and both clubs are approaching it calmly in terms of finding an agreement that suits everyone. In addition, the fact the English club are still alive in the Champions League and the FA Cup means they would prefer to wait until the season concludes. Mainly to stop any noise which could destabilise the team.

If Barça don't reach an agreement this summer, they will give their all to bring him in for free when his contract expires next summer.