Brazilian midfielder Arthur Melo has seen his market value increase sharply since he made the switch from Gremio to FC Barcelona two years ago. Barça paid €31m, plus another €9m in variables, and 72 matches later he is moving to Juventus for €72m (plus €10m in variables). That means in just two years, his overall value has gone up by €41m.

Arthur has played 48 matches in LaLiga, 10 in the Copa, one in Spanish Super Cup and 13 Champions League contests. This means Arthur's value has increased by around €500,000 per appearance. 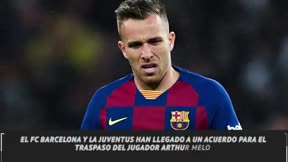 Juve sporting director: Barça's Arthur Melo is an ideal signing for us

To be more precise, it's an increase in value of €570,000 per match for Barça. This is a significant rise despite his fitness issues and how hard he's found it to force his way into the first XI at the Camp Nou.