Barcleona have confirmed that Antoine Griezmann suffered a quads injury in the clash with Real Valladolid. He went off at half-time in the 1-0 win at the new Zorrilla.

"Tests this morning have shown that first-team player Antoine Griezmann has a muscle injury in the quadriceps of his right leg. He is therefore not available for selection at the present time and the evolution of the injury will condition his availability," said Barca on Sunday in a statement.

"The French player participated in Barça's victory this Saturday against Valladolid (0-1), playing the first half before being replaced at half time by Luis Suárez."

This kind of injury often takes around three weeks to heal and Barcelona's last two league games are next week, on Thursday then at the weekend.

Griezmann's aim will be to try and be fit for the Champions League which re-starts in August. 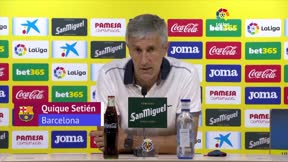