The new season begins for Barcelona on Sunday when they host Villarreal at Camp Nou after a short and complicated preseason under new coach Ronald Koeman.

Hopefully, the problems off the pitch will be brushed aside when the football starts for real. With Messi and Griezmann to lead the attack with Coutinho, Ansu Fati, Ousmane Dembélé and Francisco Trincao must compete for one spot, with the injured Martin Braithwaite less likely to play as often.

In preseason, Koeman has favoured a 4-2-3-1 formation. That doesn't affect the back five too much, other than Neto currently filling in for the injured Ter Stegen, but it does change things in the middle and further forward.

De Jong, Busquets and Pjanic will compete for the two midfield spots, with Aleña and Riqui Puig backup options. 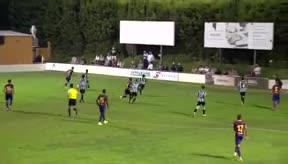 In the preseason, Koeman has used Messi as a false nine, giving him the freedom to move. Griezmann and Coutinho have both played the 10 role behind him, while Griezmann has played right at times and Coutinho left.

Therefore, along with those three, there is one role up for grabs. Ansu is the youngest but also the most in form after a fantastic debut season. Dembele is the 'veteran' but injuries have prevented him kicking on. And Trincao is the wildcard who has just arrived but is already showing his quality.