Time is running out and Barcelona have still not found a striker. With Luis Suarez injured, the club are working hard to bring someone in this month.

With sporting director Eric Abidal leading the hunt, they have been offered a lot of players. All of them ruled out. Rodrigo Moreno was the target but negotiations with Valencia have stalled. It's unlikely, although not impossible, that Los Che owner Peter Lim will lower his pretentions.

Therefore, with Carles Perez and Abel Ruiz leaving, Barça are left with four attackers: Messi, Griezmann, Ansu Fati and Dembélé. That means Quique Setien, if they all stay fit, only has one backup. 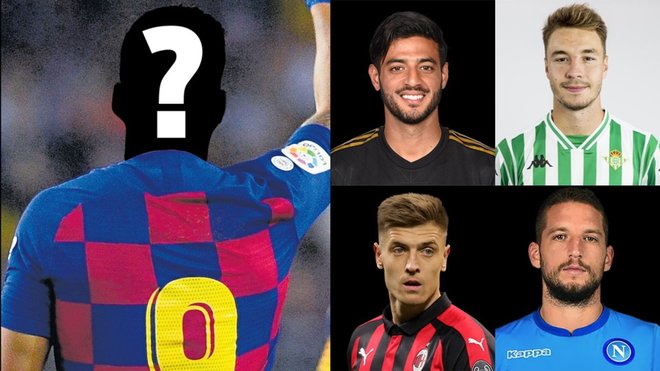 Not signing anyone would be a risk but they don't want another Kevin Prince Boateng signing. One day it will be revealed why he was signed last January, playing 303 minutes in six months without scoring at a cost of one million euros, the same as Barça received for Munir's move to Sevilla.

A lack of finances will influence any moves this month. Therefore, Lautaro Martinez (a summer target), Aubameyang, Werner and Co have been ruled out. And with Rodrigo looking more and more unlikely, Barça are running out of options...

AC Milan's Polish striker was liked by Barça when he was at Genoa. He's only 24 and a great finisher, although the club feel he is too static. The arrival of Zlatan Ibrahimovic in Milan and has seen Piatek pushed towards the exit door. Mourinho's Tottenham are also keen on the man who has four Serie A goals this season.

The Mexican, 30, was close to coming to Barça last January and has been linked again. The Los Angeles FC player would love to move to Camp Nou. In his favour is his knowledge of the league. He's also a goal scorer: as 38 goals in 36 games in MLS las season attests.

Quique Setién knows him well from his time at Real Betis. He rates his directness and movement. He's also only 26. He knows the Spanish league and has scored eight goals this season. The good relationship between Barça and Betis could make things easy, but Abidal's team aren't convinced.

The 32-year-old Belgian is out of contract in the summer and has not renewed with Napoli, so the Italians would not demand much money, He can play across the attack, although is not a pure No.9. He has scored five goals in six Champions League games this season although is now on a dry streak following an injury problem. Teams like Inter, Arsenal and Juventus have also been linked.

The man from Tenerife is out of contract this year and Chelsea would let him leave. Pedro himself has admitted he would like to return to Barcelona. There would be no adaption time and he already knows the dressing room. The obstacle to his return would be the limit it would place on the progression of players like Riqui Puig, Ansu Fati and Alex Collado.

The France striker, also at Chelsea, is 33 now and hardly plays under Frank Lampard. He is looking for an exit. His experience -- a World Cup winner as France's No.9 -- counts in his favour, but Barça feel he lacks dynamism. He's teammates with Lenglet, Umtiti, Griezmann and Dembele with the national team, so knows plenty of people at the club.

Netherlands having a national debate over Memphis Depay

Netherlands having a national debate over Memphis Depay